Out in the Wild 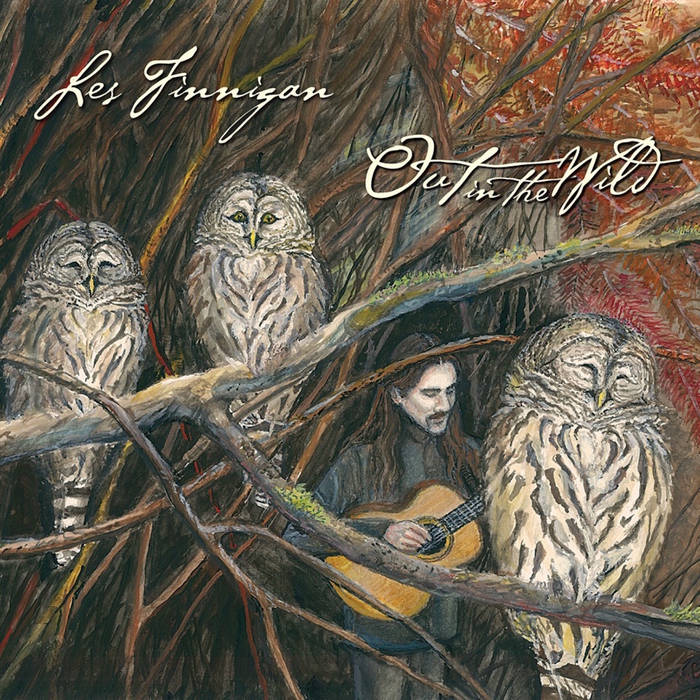 
"Out in the Wild reveals more depth and nuance with repeated listenings and is a fine addition to Les Finnigan's musical catalogue."
- Patrick Ragains, Minor 7th

From big polyrhythmic riffs to contrapuntal works, and dreamy melodic pieces to syncopated country blues, Canadian acoustic guitarist and composer Les Finnigan displays his love for different styles and forms and unifies them on one instrument with his inimitable artistry.

1. Neuromotion - This was written while waiting outside of Neuromotion, where my wife goes to physiotherapy. Often the class is asked to do multiple verbal and physical tasks simultaneously. Acoustic guitarists may not work up a sweat when they perform but they do play multiple lines and multiple rhythms too, so there is some science behind the notion that playing music keeps you young, in body and mind.
Tuning: CGCGCD

2. The Dominant Phrygian - This piece was entirely built using the fifth mode of the harmonic minor scale, which is also known as the Phrygian dominant: 1 b2 3 4 5 b6 b7. This scale is often used in Spanish and Middle Eastern music. I love the fact that changing as little as one note can evoke a whole new sense of place. The different rhythms applied here also take it to a slightly different place.
Tuning: DADGAD

3. Box of Gould - It’s impossible for me to even estimate the number of hours I’ve spent studying, playing, or listening to the music of Bach. In 2012 Sony released the Glenn Gould Complete Bach Collection - a 44 disc set, on what would have been his 80th birthday. I bought it for myself for my birthday and was inspired all over again, especially by Gould’s performances. He injected a new vitality into this serious music by playing it with enthusiasm, joy, and a slight swing, but in a way that was still respectful of the style.
Tuning: DGDGBD

4. More or Less Happy - This piece was written on electric guitar when I was 19. The original title was “The Happy Song” and it was performed by a band I was in named “More or Less”. The song never made it to the stage, but it did make it onto a cassette recording of one of our rehearsals. Occasionally I would listen back to it and it would make me feel happy, so I relearned it and rearranged it for acoustic guitar. Composing in many styles provides the variety and recording everything on solo acoustic guitar provides the continuity.
Tuning: EADGBE

5. Two-Faced Gunslinger - Artists often say that they don’t know where their ideas come from and for this piece I really don’t know how I came up with two such contrasting sections in one single sitting. The title was inspired by an old unreleased piece of mine called “The Showdown”. The fast triplets in the bass line reminded me of the snare drum in the Band of Gypsys song “Machine Gun”.
Tuning: CGCGCE

6. Bald Cypress Blues - The image for the album cover originally came from a photo taken at VanDusen Botanical Garden of a barred owl mother and her two big babies. The painting was done several years later by my wife Valeria and after it was completed she thought they looked lonely so I was added to keep them company. The bald cypress trees (as seen in the top right corner) are constantly defending themselves by saying, “We are not bald, we just have small leaves.”
Tuning: FACFCF

7. What I Meant to Say - The title is a reference to this style of invertible counterpoint (or double counterpoint) that is also used in the writing of fugues. The analogy of a conversation is a good one. A statement is made in one voice and then it is restated in another voice in a different octave. It can be inverted again and changed to a different key or rephrased to keep the conversation moving forward. This titling idea has been used in my previous compositions “What’s Your Point?” and “Snowflake Variations”.
Tuning: CGCGCE

8. Bungee Chord Substitution - On a daily basis I am using bungee cords to pack up my music gear for live performances. This piece uses a jazz harmony technique called chord substitutions. It’s also in swing time, which can put a swing in your step, or a bounce in your bungee.
Tuning: DADGAD

9. Bedtime for Night Owls - Being an apartment dweller and a musician means that if I want to work late at night the only instrument that is quiet enough is an electric guitar that is not plugged in. Multi-instrumentalists will often turn to the piano to work out complex harmonies because the keyboard is laid out in a linear fashion which makes chords easier to visualize. I am now using almost 30 different open and alternate tunings and I have to admit that it can sometimes get confusing. To sit down with an electric guitar in standard tuning was the perfect tool to work on a harmonically dense piece like this.
Tuning: EADGBE

10. Sunrise Moon - This is from another late night turned early morning session. It was written on electric guitar while exploring a scale that I was not familiar with: the fifth mode of the melodic minor scale, which is also known as the Aeolian dominant: 1 2 3 4 5 b6 b7. It was then transposed to a different key and arranged on the fretboard in a way that the melody can sustain and provide harmony for itself, along with a simple bass line.
Tuning: DADGBE

11. Double Crush - Double crush syndrome has the same symptoms as carpal tunnel syndrome, but instead of the median nerve just being affected at the wrist it can also be compressed at the neck or shoulder. In July 2014 I began to show symptoms while I was writing this physically demanding piece. I could only play the fast section twice in a row and then my forearm would feel like it was on fire and my fingers would start to tingle. I now do an hour and a half of stretching and exercises throughout the day and I also use a bass guitar strap that has a shoulder pad made of neoprene and this helps relieve some of the pressure on the neck and shoulder. Physiotherapy is still ongoing and symptoms are slowly diminishing but it will take time to fix the wear and tear of over 35 years of playing guitar.
Tuning: CFCFCF

The guitar on this album is an Alberico OM with a German spruce top and Honduras mahogany back and sides. It was recorded using a matched pair of Miktek C5 condenser microphones through a Pendulum Audio SPS-1 pre-amp, a Sunrise magnetic pick-up through an ART Project Series Tube MP with a Tung-Sol 12AX7, a Lexicon MX-400 reverb, an Apogee Duet interface running at 24 bit / 96 kHz, and no edits or overdubs were used.

Special thanks and credit to:
Valeria Fellini for the watercolour paintings
Graemme Brown at Zen Mastering
Gary Dunham at Mercury Graphics
Recorded and produced by Les Finnigan