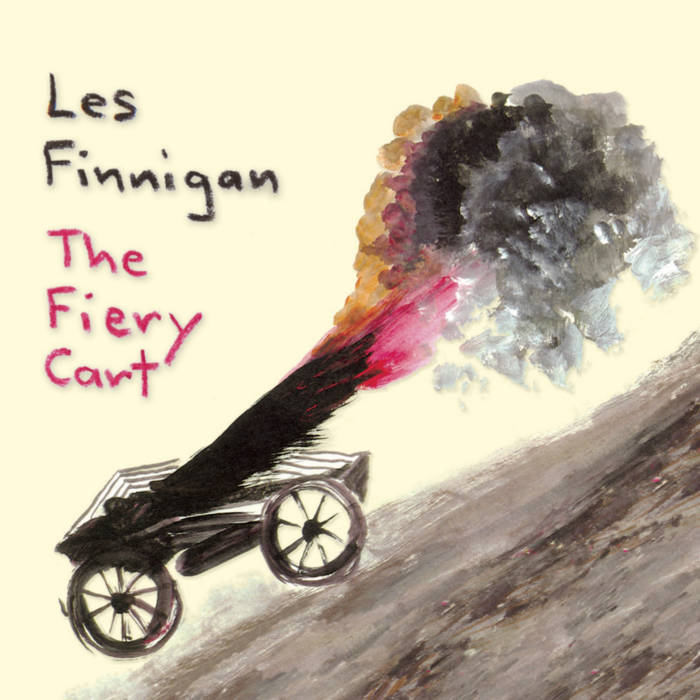 Despite the title, it’s a relatively restrained Les Finnigan who shows up on The Fiery Cart. While this popular street entertainer and solo finger-style guitarist can rip with the best, here he concentrates more on creating moody soundscapes—some of which are downright eerie. I’m thinking of tracks like “The Fairlane”, which kicks off with a cycling, almost Moroccan-sounding riff before adding a bevy of unpredictably timed slapped harmonics, or “A Sense of Pillow”, which is saved from lullaby softness by its undercurrent of psychic distress. True, the former carries echoes of the late Michael Hedges’s work and the latter sounds a bit like something Bill Frisell might have dreamed up, but those are pretty big names to conjure with in the world of solo guitar, and Finnigan wouldn’t embarrass himself in their company. This is also an exceptionally good-sounding record; even through crappy computer speakers it sounds like Finnigan and his instrument are right there in the room. Nice work.
- Alexander Varty, The Georgia Straight

“Perhaps November is the right time to slip Les Finnigan’s latest CD, "The Fiery Cart," in the CD player for a spin. The changing colors outside reflect Finnigan’s use of the tonal palette of his 6-string to create aural images that are at the same time warm and inviting, and dark and complex. Finnigan is no rapid-fire flexer of guitar flashings, but more a crafter of melodies that breathe. A good example of Finnigan’s complexity is "Dreaming Arrangements," built around a simple yet flowing melody line, but augmented by darker, minor chords that add tension to the tune, but not in a way that distracts. It’s like a picture of life within a song: beauty tinged with sorrow at unexpected places. Other cuts where we hear the same effect are "Dancing Around the Topic," "A Sense of Pillow," and "Three Perspectives." "Bowl o’ Cocobolo" is a rolling tribute to the magnificent Fabrizio Alberico steel string used to record "The Fiery Cart." It’s an outstanding instrument, put to good use in Finnigan’s hands. Finnigan is like many modern fingerstyle players, using tapping effectively to add power to arrangements, like on "The Fairlane," where pops and string bends add a sort of hypnotic feeling. "Fret Buzz" is a dancing, weaving song that reveals the power of the guitarist’s right hand technique. The final cut, "Tord and Bobo," is slow, almost dirge-like, yet somehow enchanting. If you’re looking for some great songs for a cool fall day, "The Fiery Cart" is a fine CD of solo acoustic guitar music.”
- Kirk Albrecht, Minor 7th